For our unitholders, if you simply ignore realizations and focus solely on our fee-related earnings, we have a clear line of sight towards strong double-digit growth in fee earnings for next year.

This alone could generate approximately $1 per unit or more depending upon the timing of certain events, particularly funds being launched. You should know, which I actually didn’t, that the S&P is yielding around 2% today. It’s incredibly low. And we don’t see why our mostly locked up fee earnings shouldn’t be capitalized in our stock price at a similar, if not, lower yield to the S&P. You could do the math. A 2% yield, the same as the S&P on $1 off fee-related earnings implies a $50 stock price, not to $26 where we are today. I know this seems hard to believe but it happens to be mathematically true and finance is supposed to have something to do with mathematics.

At a 3% yield which is a 50% premium to the S&P for long-term locked in cash income - and I wouldn’t understand why you made a premium, it implies the stock price of over $30 and that’s giving no consideration to realizations, which have already added $0.40 per unit to distributable earnings in the first half of the year and which have averaged almost $2 per unit in distributable earnings over the past three years.

But when you put this all together, I think the math is sort of simple and Blackstone sort of has earnings in two pieces; one, fee earning income, which is highly predictable and which deserves a market multiple at a minimum and that takes you to much, much higher levels than where you are today, as well as our distributions from realizations which always happen and that’s our primary business, good investments for our limited partners and that’s why they give us so much money. So I’ll leave that all to you. 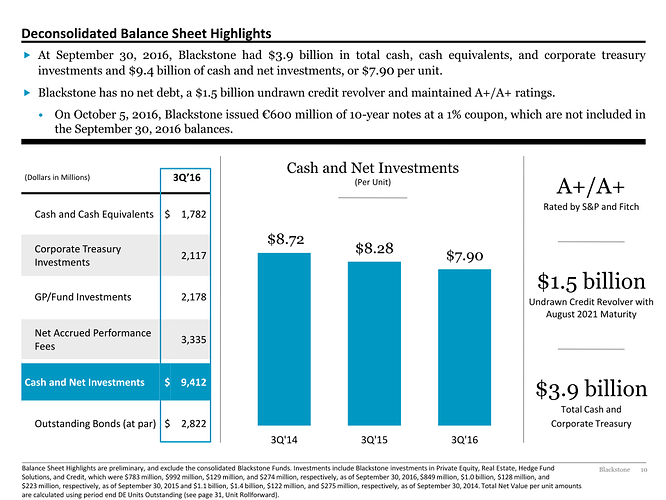 I think it’s a great question now let’s ask it. Not looking at it from your own personal viewpoint which undoubtedly is one of frustration, but just sort of trying to step back analytically. Can you explain why the business you have that whose attribute you described as being pretty exemplary. As lower PE as it has. Have you done any work internally to determine that. Is it just the nature of the kind of business that you are in or the people look at it has being more episodic because the cash flows from private equity come in whenever they come in. Is there something beyond your own personal view as to why you think that is or it whether it can change?

I think people lack confidence in terms of going through this cycle. In terms of what’s going to happen and so they put [indiscernible] discounts on a firm like ours and we have a model of the growth of the firm that in nine years it’s going to go from roughly $30 a share to a $130. And all the assumptions are completely reasonable.

So if I could tell you, you could buy a stock like that and have a very substantial yields, because this total return of like the $130 a share you would probably buy it because that’s probably better than most things you would buy. But you obviously don’t believe me. So since we’ve been more or less right remember our high performance products with 30 years are earning double the stock market nut you still don’t believe that will happen the next day.

It’s not my belief actually, I think you will do well because I own the stock, but I’m not really asking whether is it just as the cycle and other people thinking they are not going to make it through or trying to get out?

It’s people’s fear, they think that what we do is episodic it’s not, but why does it keep happening over 30 years? it’s not like a trading business we are guessing. When we buy an asset, we have access to inside information. We study this stuff, we get consultants and we can accelerate the growth of these businesses and we can put some leverage on top of it which amplifies that a bit but it’s basically the improvement over business.

And that’s not going to stop and so this isn’t like guessing, this isn’t like speculating, we are not running a bond department and a big investment bank where anything can happen. And so this is like a bit of the tortoise type business not to hare, it’s not guessing and it’s in very part of our business where we constantly outperform, because we have a good system.

So people assume I guess that that’s not going to ever happen again. I find that if you are taking two foot jump shots, if you want to assume that the probability of the ball going in close to zero and you have to like standing at two feet putting the ball in god bless you. But what will happen is we will be able to hit our model and we will deliver that and people who are skeptics will miss that and that’s the nature of this security’s business. People more or less only fool themselves that they want to buy value.

Basically they just want to buy something that’s going up and because they are looking for physiological comfort of things going up, things at bottoms people hardly ever buy and so I look at our thing and I would say we are relatively new public asset class, nobody has seen a company like ours last year. We were the most profitable money manager in the world, public or private. That kind of question would normally come at a firm that does that.

I think we were also the most profitable the year before that’s two years in a row that’s not so bad. So why does it have a [indiscernible] multiple? Because people aren’t so smart and so I have the time to try and educate people, they don’t always like to be educated, but we’ll show them with performance and we started with no assets, we’ve done hardly any acquisitions we got $335 billion and that’s like the equivalent just to put it in perspective. If all of our money was 20% carrying money, which it isn’t, we’ve got some 15 and a little bit that doesn’t have a carry, we would be managing over $6 trillion of assets, we would be by far the largest asset manager in the world, at 15% we would be the same as BlackRock.

So I think somehow I must be a tragically bad communicator and somebody thinks this is some little business that somehow gets lucky. I mean we have 800,000 people just working in our private equity area. This is an art form, this is a business and people will see it as such when maybe we get somebody better than me explaining it, but it’s really a wonderful, wonderful business and it’s growing at quite a rapid rate and customers can’t get their money back as a rule because these long-term commitments. So it’s infinitely better than any kind of mutual fund complex or anything like that.

So I get frustrated, but then I say “I’m basically dealing with smart people” and eventually you will catch on as we keep performing and people worry our cyclicality and what’s going to happen. What happens in those cycles is we do massive buying when markets are dislocated and we have more access to capital than anyone in the world to do that my goodness doesn’t get better than that does it. And then they come back and we sold bunch of them and you keep reloading, but there is a huge growth trend along the way with huge conservatism in the company.

I mean I love what we do, maybe every person who comes up says that but I love it for a reason. You are mostly in the money management business, in this business if you earned double the stock market, you would have a lot of people like you. So what’s fascinating to me is that people like yourselves who are looking at our stock are behaving just the opposite as the people who give us these monster amounts of money where we’re penetrating every asset class. People provide money way more than anybody in the world because they have done their diligence, they know what the outcomes are and they just want more and more of it and we have the discipline to make sure that we don’t take more money than we can productively invest it in.

So we are the winner with nobody in second, third or fourth place from both the institutional community and retail who understands the power of this model, but we haven’t been able to convert the public market. You will give up, not you, but you will all give up and you will get on the training you will have wonderful ride and I’ll be cheering you on. In the meanwhile, I don’t like I don’t know 23% of the company and I’m like a happy person and we got amazing people and the world’s best reputation to do this stuff.

And people say you should be valued at some kind of garbage land multiple. I mean just it’s like a phenomenon and at some point in the next ex-years people will wake up and say, what was I thinking, what was I thinking and the smart people like you, who own it, you will be heroes and the other people will say, “yes, yes, yes I know I should have bought it.” So that’s demand.

If You Sold Blackstone Group LP, It’s Time To Buy Back In