Micron: End Of The Oligopoly And The Start Of The Server Uptick

If Korean memory competitors Samsung Electronics and SK Hynix fill the vacuum and sell to Huawei, it will mark the end of a strategic DRAM oligopoly with Micron.

The escalation of the U.S.-China Technology/Trade War over Huawei has negatively impacted U.S. semiconductor companies, including Micron Technology (MU), which has further clouded the memory market. Already mired by free-falling chip prices and excess inventory, some analysts subsequently suggested the well-published 2H 2019 turnaround in ASPs (Average Selling Prices) could be pushed out into 2020.

This article will focus on two key aspects of the DRAM memory market - the end of the much ballyhooed DRAM oligopoly and the start of a critical turnaround in the DRAM market, driven by cloud server companies.

End of the Oligopoly

Micron Technology is part of a DRAM oligopoly with Samsung Electronics (OTC:SSNLF) and SK Hynix (OTC:HXSCL). For a background, I refer readers to my December 17, 2018, Seeking Alpha article entitled “If Micron Is Part Of A DRAM Oligopoly, Why Is The Stock Down 55% From A High In May?”

The key premise to the DRAM oligopoly is that since there are only three major DRAM suppliers, they could adjust output, maximize earnings, and influence their stock valuations. In definitive terms, “competing firms providing do not explicitly collude on any feature (such as price, quantity, or product characteristics), but rather, observe and imitate each other’s actions in a way that is mutually beneficial to both sides.”

The oversupply of DRAMs, coupled with the significant drop in ASPs, significantly strained the boundaries of the oligopoly. The 8Gb DDR4 spot price, which was about $7 in early 2017 reached a high of about $9.50 at the end of 2017 before beginning a sustained drop to about $3.40 today. 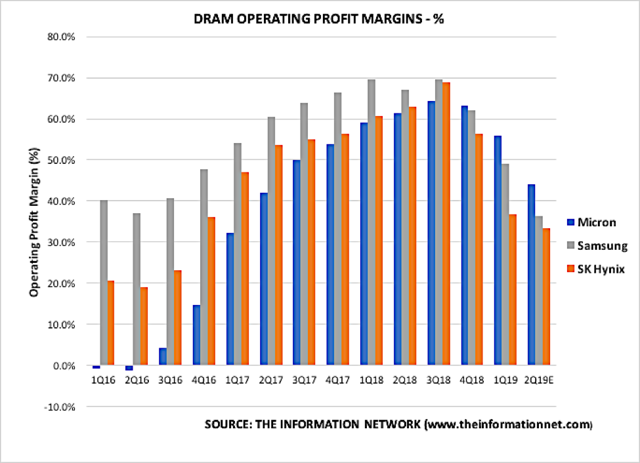 Factoring in the China Technology/Trade War

The U.S.-China Trade War escalated to a U.S.-China Technology War over Huawei and has further clouded the memory market, which has prompted some analysts to suggest the well-published 2H 2019 turnaround in ASPs could be pushed out into 2020.

The U.S. government in January 2019 accused Huawei of stealing trade secrets, violating economic sanctions, and concealing its Iran business dealings via an unofficial subsidiary Skycom in a 13-count indictment.

As a result, the U.S. has banned U.S. companies from doing business with Huawei. The ban applies to goods that have 25% or more of U.S.-originated technology or materials. A list of companies can be found here.

U.S semiconductor manufacturers Intel (INTC), Qualcomm (QCOM), ARM, and Micron Technology have announced they would stop supplying their products to Huawei. Samsung Electronics and SK Hynix are not on the list. They can replace MU as key suppliers of memory chips to Huawei, which represented 13% of MU’s memory sales in the first six months of its recent fiscal year. Both SK Hynix and Samsung also count Huawei has a major customer. Huawei is estimated to account for 10-15% of SK Hynix’s total sales and is also one of Samsung Electronics’ five biggest customers (includes display).

Table 1 shows specific purchases of DRAM and NAND chips as a percentage of total purchases by supplier.

In early June, The National Development & Reform Commission of China told Samsung Electronics and SK Hynix to continue to supply their components to Chinese companies. Earlier, the Ministry of Foreign Affairs of China put the same pressure on South Korea as well. To date, both Korean memory companies appear to be still selling to Huawei.

The slowdown in the memory industry is further being exasperated by the technology/trade war. The average price of DRAM chips has been cut in half (so far) since peaking in the third quarter of 2018 and could still log double-digit declines in the third and fourth quarters of 2019.

Although initial DRAM output from Changxin would be small and of inferior performance, output could ramp with investment by Huawei, which is in the process of redefining its supply chain because of the banning of U.S. companies. This move would increase competition and further the goals of China’s 2025 program. To counter, the U.S. could restrict chip production equipment, like it did with Fujian.

The memory industry is in turmoil and faced with a great deal of uncertainty. Both Korean memory companies are faced with declining sales, inventory overhang, and stock that has lost half its value in the past year. The opportunity to unload record excess DRAM inventory, which increased from an oversupply of 0.5% in 2018 to an oversupply of 4% in 2019, would break the oligopoly.

Would this be a problem?

The NAND market is comprised of Samsung, SK Hynix, and Micron, as well as Toshiba Memory, Western Digital (WDC), and Intel (INTC), in addition to several smaller companies. The six major NAND companies make it nearly impossible to operate smoothly as an oligopoly to adjust output, maximize earnings, and influence their stock valuations. The three DRAM companies do enable these approaches.

Table 2 shows the under and oversupply of DRAM and NAND chips between 2015 and 2019. I’ve plotted the data in Chart 2 for clarity. On the question of whether an oligopoly mitigates over and undersupply, these data illustrate that there is no evidence of any advantages on the DRAM oligopoly versus the non-oligopoly NAND. Both chip types exhibited volatility in supply, and the amplitude of volatility was not mitigated by the oligopoly.

Chart 3 shows blended ASPs for DRAM and NAND between 2014 and 2019 (estimated). ASPs for both devices exhibit a cyclical rise in ASPs, but the peak in DRAM ASPs is clearly evident that, by controlling output and pricing, there are benefits of the oligopoly. 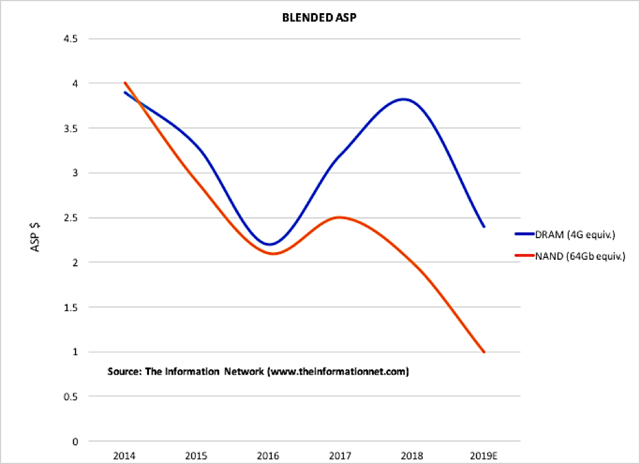 Chart 4 shows shipments of DRAM and NAND chips, based solely on the number of chips and irrespective of bit size between January 2017 and April 2019. Here, we see similar growth, so shipments are not influenced by whether the DRAM market is an oligopoly.

Chart 5 shows changes in bit growth. There is clearly a difference. The uptick in NAND bit growth in 2018 is due to the switch to 3D NAND. 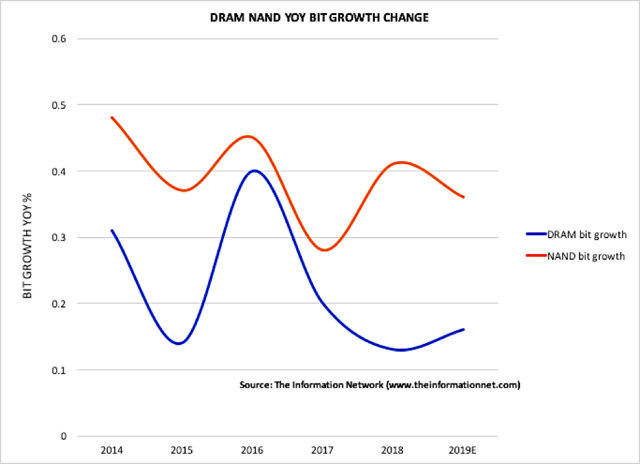 The problems in the memory markets are a confluence of several factors - high ASPs from undersupply, low ASPs from oversupply, a slowdown in PCs and smartphones, double purchasing by customers to avoid further price increases resulting in inventory overhang, and the U.S.-China trade/technology war impending demand.

DRAMs for servers were a high flyer in 2018, but server companies began doubling up of purchases to avoid escalating ASPs. They now are burdened with inventory overhang that strongly impacted server capex for Q1, as shown in Chart 6. Adding to the inventory overhang in Q1 was the softening DRAMs by Huawei. Chart 6 shows overall growth in capex spend of 15% QoQ in Q2. 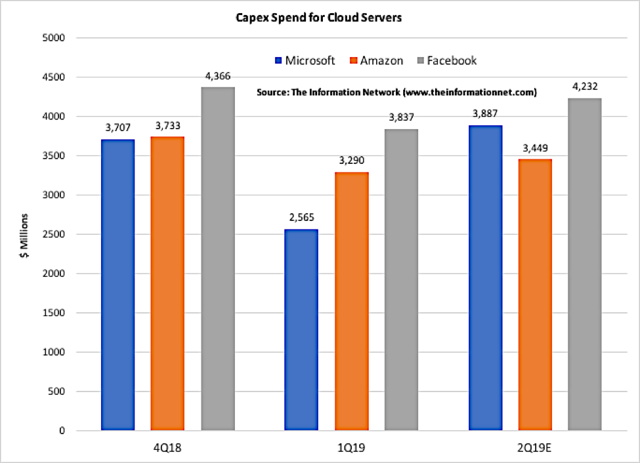 In January 2019, I estimate that DRAM inventory at server companies exceeded 10 weeks, versus a normal level of 4 weeks. In June 2019, according to our report entitled “Hot ICs: A Market Analysis of Artificial Intelligence (AI), 5G, CMOS Image Sensors, and Memory Chips,” most of the server companies are close to the normal historical level of 4 weeks. Alibaba (NYSE:BABA) still has 6 weeks of inventory, while Baidu (NASDAQ:BIDU), Tencent (OTCPK:TCEHY), Amazon (AMZN), and Microsoft (MSFT) are down to 5.5 weeks. Facebook (NASDAQ:FB) has an estimated 5 weeks of supply while Google (NASDAQ:GOOG) (NASDAQ:GOOGL) is at 4 weeks.

I questioned the efficacy of a DRAM oligopoly in my above-mentioned SA article entitled “If Micron Is Part Of A DRAM Oligopoly, Why Is The Stock Down 55% From A High In May?”, particularly as it pertains to stock values. Readers have commented to me that they bought MU stock mainly because it was an oligopoly.

The “DRAM oligopoly” term has been written about extensively in the literature as well as other Seeking Alpha articles. Companies that can adjust output, maximize earnings, and influence their stock valuations can “collude” in a legal way to manipulate the market, driving up stock evaluations.

Data in this article show that the DRAM market has behaved differently than the NAND market in several respects and could be a result of the DRAM oligopoly.

However, chipmakers are struggling with inventory. Reducing supply to stem inventory increases seems a more realistic solution than waiting for demand to rebound. In its Q1 2019 earnings release, Samsung Electronics reported its worst operating-profit drop in more than four years. So, if Samsung and SK Hynix start selling to Huawei rather than side with its fellow oligopoly member, then the oligopoly will disband. And, if that happens, then one of the tenants of this oligopoly - competing companies banding together to maximize profits and revenues, will be broken.

With PC and smartphone sales languishing, servers are the key to a turnaround in the DRAM market. If my analysis is correct, DRAM inventory at server companies will normalize to 4 weeks in Q3 2019. At that time, we will see a surge in DRAM purchases by server ODMs, taking advantage of the lowest ASPs they will see in the next several years before prices will start ramping.